Our player Carla Suarez has secured a place in the WTA Tournament of Champions to be held in Sofia, capital of Bulgaria, next October 28th to November 2nd. The competition featured the top six players in the year winning at least one tournament, not contesting the WTA Masters in Singapore a week before, plus two players invited by the organization. Carla Suarez, currently number 19 in the world ranking, come to the meeting this season after winning her first WTA title in...

Our player Carla Suarez says goodbye to an outstanding tournament, both individually and in doubles. Carla returned to stay at the gates of his first Grand Slam semifinal to fall with the young Canadian player Eugenie Bouchard when winning 4-1 in the third set, but ended up losing by 76 (7-4), 26 and 75 . Was a shame, because she was only at 1 play to get into a Grand Slam semifinals or better clay court tournament of the world, but we will work to get it and we are...

The PROAB TEAM Tennis player Carla Suarez Navarro, world ranking number 15 , won in Oeiras (Portugal ) her first WTA tournament after beating Russian tennis player Svetlana Kuznetsova 6-4 , 3-6, 6-4 after two hours and ten minutes of play. Carla, aged 25 , top seed Oeiras Tournament , won her first tittle. At last she reached the sixth time lucky for Carla Suarez , who had been at the gates in Marbella Tournament (2009 and 2010 ), Acapulco (2013 ) and the Portuguese round...

Carla Suárez comes back to Top 20 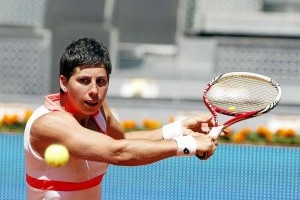 After his great performance in Rome, where she lost against the World No. 1 Serena Williams, Carla Suarez returns to the Top 20. Notably, considering scores of 2013, Carla is located at number 15! Lee la noticia en marca.com