Carlota Martínez Círez, PROAB TEAM TENNIS ACADEMY player has won her first ITF Junior Title in the Tournament of Luxemburgo, after winning the French player Margaux Rouvroy, by 64 64. Congratulations to Carlota and all the staff of PROAB...

Our player Carla Suarez has proclaimed champion Doha WTA Premier tournament, played  from 22 to 27 February 2016 , beating the Latvian player , Jelena Ostapenko by 16 64 64 . A hard-fought win for Carla gave the first set by a convincing 16 with a game of withering young player. But the tenacity , experience and patience Carla made ​​her recover the second set and the third and final that led her to lift the title and thus is positioned at number 6 in the world ranking WTA highest ranking of his career to date . Carla rallied from a set down...

Posted by ProAB Team on 8:26 in News | Comments Off on Roberto Carballés, winner Challenger Mohammedia 2015

Our player, Roberto Carballés, had won the Mohammedia Challenger this weekend after winning Kamil Majchrzak by 76/62. Thanks to this victory, Roberto is positioned at number 120 in the ATP Ranking (his best ranking so far). Congratulations Roberto from all the PROAB TEAM...

Posted by ProAB Team on 10:32 in News | Comments Off on Paula Badosa, winner ROLAND GARROS JUNIOR 2015

Paula Badosa Gibert, aged 17, has been proclaimed champion junior ROLAND GARROS 2015 after beating Russian player Anna Kalinskaya 6-3 6/3. Our player has earned the title without having dropped a set all tournament. Paula is the second Spanish player who inscribes her name in the Championship for children under 18 years. Lourdes Dominguez was the first in 1999 , beating France’s Stephanie Foretz . Paula makes its way , happy with the victory : ” It’s incredible. I’ve dreamed earlier this week and get it, it’s...

Our player Carla Suarez Navarro, finalist of the Premier Mandatory tournament in Miami, bursts into the TOP10 of the WTA world rankings and becomes the third Spanish player to date , included in this unique position after Arantxa Sánchez Vicario and Conchita Martinez. Carla takes an unstoppable start season, by winning the final in Miami exnumber two player Venus Williams and two of the world ‘s Top 10 WTA ranking , Agnieszka Radwanska and Andrea Petkovic , who will take the tenth place in the standings . Also played Final in Antwerp...

Our player Oriol Roca gets the title of ITF Future F9 Antalya (Turkey ), winning in the Final the Brazilian player and second seed in the tournament, José Pereira for 75 76 and advances to the TOP – 250 of the ATP world rankings .

Posted by ProAB Team on 16:21 in News | Comments Off on Jordi Samper enters the TOP-200 de la ATP

Our tennis player Jordi Samper, thanks to the good results obtained in the tour of South America playing in the semifinals of the Challenger Bucaramanga ( Colombia ) and Santiago de Chile, allow him to access the TOP -200 of the ATP world...

Posted by ProAB Team on 16:10 in Carla Suárez, News | Comments Off on Carla Suarez 5th best player of the year 2015

Six finalists in the Christmas Tournament at C.E. Laietà

Posted by Pep Sesat on 17:24 in Jan Pallares, News | Comments Off on Six finalists in the Christmas Tournament at C.E. Laietà 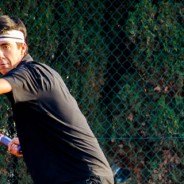 Last January 7th took place the FinalMatches of the Christmas Tournament played at the CE Laieta in which six of our players competed for the win. Although unequal luck, all deserve our congratulations for being finalists in this Junior Winter Circuit Tournament of the Catalan Tennis Federation. Here is a short video with the participation of our players.   Resultados CADETE MASCULINO 1 (CM1) Pol Martin(ProAB) vs Xavier Gabarró Derrota 7-5, 6-1 CADETE MASCULINO 2 (CM2) Adrià Arenas(ProAB) vs Jofre Tura Derrota 6-4, 6-2 INFANTIL FEMENINO...